WHY COINS BROUGHT THE RENAISSANCE OF THE HUMAN SPIRIT.

The arrival of Coins, and the first forms of ‘nomisma money’; that is state money which did NOT gain its value from verbal imperative Semite languages (barking orders of a warrior go(l)d priest), or metal hypnotism (bars), BUT due to the coin being issue by the state (Rome with iron brittle money, purposely broken in vinegar and put on a leather with its nomisma value, so Numa the king of Rome would define for their people a new digital language of information and a similar process with Licurgus in Sparta – defined scientifically by Aristotle) REPRESENTS A FIRST RENAISSANCE OF THE HUMAN SPIRIT AND ITS LEGAL ETHIC WOR(L)DS OVER the animetal, dictatorial, imperative Jihads of warrior SSemites and go(l)d $emite cult(ure)s that put metal over man, unfortunately today overwhelmingly dominant in the western world through its modern evolutions into jihad terrorism, military industrial-complex, big brother police states and creationist biblical economics, aka, capitalist idol-ogies.

So for a long interregnum between the beginning of the Axial age of reason, with the arrival of coins (tao coins in China, just a piece of wood or stone, holed in the centre) and the beginning of company-mother of machines (gunboat companies) of 2 1/2 cycles (as we can include the ethic age of love religions, when the weapon becomes a living BEING, the horse, in the middle ages, and then the repetition of the Greek-Age, with the Italian renaissance), Mankind finds a relative balance with Gaia, with the first Gunboat slave companies and the return from the eusocial love messages of the Gospel, to the brutality of Abrahamic Protestant-Jewish inquisitions will abort, string the organic decay of mankind into the present age of ‘collective subconscious death’ (God has died will shout Nietzsche, we have killed him, how we will cure our bloody hands for this monstrous sin), with neo-Paleolithic visually erased heads.

Thus even if nothing compares to the fertility goddesses of the Neolithic, the Axial age did have a bit of hope.

Indeed, reason, art, law, democracy, humanism were born then in Greece, the cradle of ‘true Euroamerican civilisation’, which today as €urope and America becomes extinct, backwards to the first animetal age of $$emite wars, means obviously that the first country to be converted in debt slave, and brutalised, is the cradle of Euroamerica, Greece.

Coins in that sense on one hand required ‘beauty of form’ for the sake of it, AMORE GRATIS, and so money for the first time paid real human art, first the face of the king, then the symbol of the city (Athenian silver owl coins).

And as iron infantry required a strong, ethic solidarious human body-soldier in Phalanx and Legios, the human body reached excellence and became the centre of art (today just geometrical metal-oriented even robotic art).

Further on coins WERE JUST FORMS OF  NOMISMA MONEY as their value WAS FIXED and so the trade was JUST exchange of real nomisma, informative language value for real physical economical value. And the LAW, nomisma, the authority of the king, or res-publica implied money was below the law, and so the law above on top of society and the first human constitutions were crafted.

FINALLY COINS allowed traders to count and digital languages were born, as THE GREEK oil trader Mr. Thales of Miletus, realized numbers had ‘inner properties of social order’. So Science was born above myth and REASON STARTED HIS MOTIONS.

And all this brought in those small coin-infantry-reasoning city-stateS assembly DEMOCRACIES, WHERE THE VOTE WAS A POSTERIORI, to REWARD OR PUNISH according to his actions the politico or general; as it is in superoganisms, which should be sending messages of pain to the politico who misbehaved, since COINS DID NOT REALLY allowed massive volume of MONEY as pure electronic screens do, AS IT HAD TO BE WEIGHTED AND CARRIED. SO plutocracies were limited, and armies requIRED HUMAN SOLDIERS, FOOT PEASANTS and so their rights should be respected.

In that sense, there will be 2 new European renaissance – the Italian one, when the same concepts were applied, before gunpowder gave too much power to kings and gunboats finally obliterated democracies returning northern europe to the semite, mythic age of barking orders through supremacist books of history (VSO languages).

And then again with the Euroamerican r=evolutions after an enlightenment tailored on the Greek-Latin spirit, renewed when after the war the iron germ(an) hordes were reduced to rubble, unfortunately regaining power with its Unification and ECB private bank…. all those themes treated properly in all the other articles with its referent names. 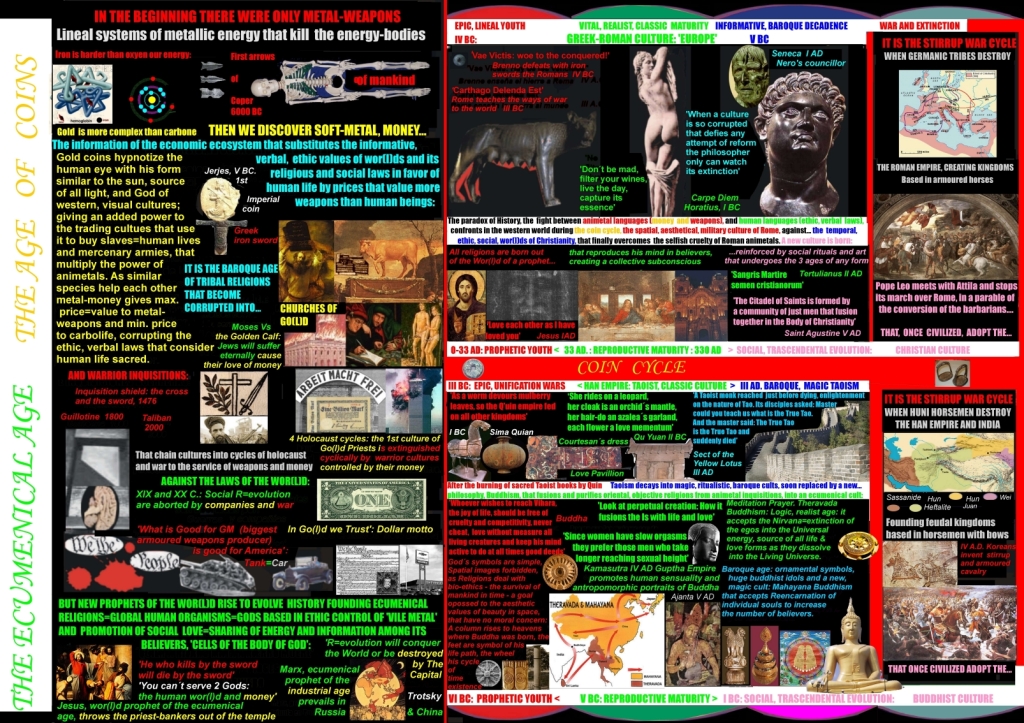 The Roman empire, paradigm of Western warrior empires, lasted 797 years, between the foundation of the Republic of ‘Iron’ after the Gaels’ invasion and the fall of Rome to stirrup barbarians in 410.

Money becomes the main engine of war, with the discovery of a metallic cycle of in-form-ation, the coin, which professionalizes ‘mercenary armies’.

It will also impose visual and digital languages over wor(l)ds, changing the mind of mankind. The dominance of the social Wor(l)d is substituted by the dominance of the individualistic I=eye: Go(l)d is now a visual language, as coins constantly provoke a ‘gold fever’, a visual fetish . . .  Good and Evil, verbal values, are substituted by beauty and ugliness, which are values of visual perception, as coins are. Sowhen the Greeks translate the Bible, they say instead of ‘God saw that the world was good’, ‘that theworld was beautiful’. Greeks had introduced coins, which ended the dominance of bartering in trade (verbal, Semite traditions) and started digital accountancy. The higher complexity of coins and iron will prove irresistible. It is an expansive age for European empires that now use metal species in a far more efficient manner to exploit people, taxed in coins and levied to serve the armies of their metal masters. Systems of total war that Assyria had essayed before, now become natural to western empires. Macedonian and Roman Empires put together all the weapons discovered in the previous cycles of war (horses, iron, chariots, geometrical war, coins), creating the Mercenary Army (Phalanx, legion). This new age in which iron and mathematical languages, through coin accountancy, become dominant, is felt by prophets of the Wor(l)d as a fundamental regression of Human Ethics. The word denounces that decadence and praises social evolution and love. Such verbal reaction gives birth to the highest prophets of love of mankind (Lao, Plato, Buddha and cycles of Jewish prophets that culminate with Christ). Confucius talks of the end of the Jen Age of Human harmony. But the Hope of resurrection of the wor(l)d is short-lived. Around 400 BC, the radiation of iron reaches massive size with the great Celtic Invasions that transfer their weapons to Rome. While Epirus in the South teaches Romans the power of coins to create Mercenary Armies. Rome becomes an empire of iron, coins and mathematical war. So happens in China with the Chin and Han dynasties that unify the nation after massive massacres (6 million dead).

In the graph, Rome is the origin of all the rituals and icons of future European Warrior empires that seize power, pretending to reinstall a ‘new Rome’. Because animetal races die, but their weapons, money and rituals of trade and war continue, there is, in fact, a continuity of warrior symbols and customs, from Assur to Persia, to Macedonia, to Rome, to European empires. So much for racial superiority: the race dies in wars and Holocausts. The product, the iron weapon or the coin, stays. So Rome gave origin to European ideologies, rituals and icons of warrior civilizations from the Franks to Nazi Germany, from Imperial eagles to Lineal  Art and military Architecture. Thus, Rome also continues the brutal fight for Total Power between the dominant ‘banking/Go(l)d culture’ of the West, the People of the Treasure and its dominant warrior culture (the Indo-Europeans). Indeed, Rome wants to control also money, but the millenarian know-how is on the hands of the Phoenician-Jewish coalition. So Rome, first exterminates the Phoenicians in Cartage and then tries to exterminate the ‘People of the Treasure’ in Canaan.

It is at this point when Jesus of Nazareth, Master of the Wor(l)d, tries to reform the religion of Banker-priests, preaching love and justice, but when he believes he can throw the banker-priests from the temple with his mass of r=evolutionaries, he is killed within a week by the eternal alliance of the Sword (Pilate) and Go(l)d (Caiphas, descendant of Aaron). It is a repetition of the confrontation between the spiritual father of Jesus (Moses) and the genetic father of Caiaphas (Aaron). And again Go(l)d wins over the Wor(l)d. And again the prophecies of the holocaust take place. The Romans, amidst an economical crisis, provoked by the evasion of capital on luxury trade attack the center of global trade, the Jewish Kingdom. But they fail to exterminate the banker-priests, who flee to Babylon with most of their Go(l)d, leaving behind the zealots at Masada, the lower class of believers and peddlers that diealways in the Holocausts, as Bankers move with capital to a new nation and the Sword revenges on their poor. When Titus enters the Solomon Bank/Temple, Go(l)d is gone and the revenge means the holocaust of the lower, energy class of Jewish farmers. The possession of Talmud means now death penalty.

So the ‘People of the Treasure’ converts to Christianity and the Old Testament, forbidden in earlier Christianity that had purified Judaism, back into a religion of love and ethics, is adopted again, along measures that will give exclusive banking rights to the ‘Treasure People’. It might be coincidental, but now Christianity becomes, with the new Go(l)d, the dominant culture of Rome. And so finally, the battle for cultural supremacy in Europe, between Rome and Judea, Weapons vs. Go(l)d, is won by Judaism that becomes ever since the Go(l)d culture of the Western World, at a very steep prize for its lower castes.